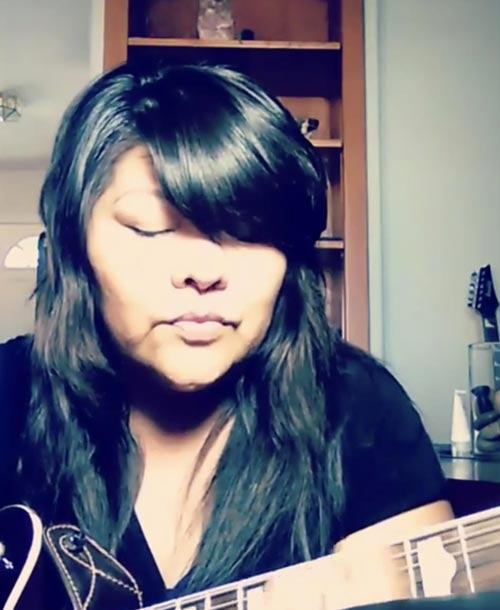 With her poignant voice and blunt lyrics, her power chord filled riffs give her fans a positive way to channel their deepest emotions. Davidica’s original music is a reflection of her own life mantra, "Speak your truth." Her live performances have been described as "Electrifying",-Rockwired Magazine.

Her first single release, "Inside My Head" made it to #2 on the National Aboriginal Music Countdown Top 40. She already has airplay at various Native stations across the United States and in Canada. Davidica has been a featured artist on Native America Calling for her debut performance with the Women of The Four Winds Tour. A multi-talented dynamo, she is already a well known photographer, whose photographs are on display in the Smithsonian at NMAI DC.

Davidica was featured in the nationally aired documentary "For The Generations" as well as several other short films.

Davidica is also the co-creator of the Independence Through Music project on the Pine Ridge Reservation which teaches talented young musicians on her reservation the skills necessary to become working musicians.

Davidica has performed at various events such as the Roasting of Ears Festival, Artifest, All My Relations Stage, Music 4 Life Concerts, the KTAO Solar Center, the West Coast Native American Music Awards Show 2014 and all three years of the Black Hills Unity Concert.

Davidica is the recipient of the Best Alternative Rock Artist at the West Coast Native American Music Awards 2014. The performance of her original song, "U Trust Who," at the awards was the highlight of the show.  Davidica has toured the Southwest with fellow Heavy Metal Rock band, Uncommon Knowledge on the "Resist Conformity" tour.